I recently met with Scott Walker from Tourism Australia to decode his remarkable success in Korea and to ask for advice on behalf of our readers with similar aspirations of working in Korea. In the following article, I document Scott Walker’s progression from a student to his current position as Korea Country Manager for Tourism Australia.

Scott’s connection to Korea began with studying Korean in high school in Australia. Scott then continued studying the Korean language during his undergraduate degree at Monash University in Melbourne. After graduating from Monash, Scott was successfully offered a place to study a Masters of International Studies at Yonsei University under the auspices of a Korean Government scholarship.

Scott gained valuable work experience in Korea long before graduating from Yonsei. During his first year of study Scott received an opportunity to intern with Australia Education International (AEI). Following a student testimony of himself on the Monash University Korea Studies website, AEI approached Scott as a potential candidate for an internship position they were offering. Scott was invited to meet the Education Counsellor at AEI to discuss the potential internship, which also proved to be an eye opening experience.

If I’m honest I wasn’t truly aware of how Australian organisations were operating day-to-day in Korea and this meeting really enlightened me about what Australia was trying to achieve in Korea. It is also where I first heard about AustCham and ANZA (Australia New Zealand Association).

Scott was successfully offered an internship with AEI. The internship then quickly led to a part-time job for Scott; while juggling his studies at Yonsei for the next two and half years.

It was a soul searching time because my contract with AEI had ended and I needed to decide whether to invest my time here in Korea with no guarantees or go back to Australia. I realised it would be difficult to utilise my contacts in Korea back in Australia and was concerned I needed more work experience internationally. There’s also a shortage of Korea related job opportunities back home.

The rumour of a short-term Austrade opportunity then injected wind into the sail of Scott’s tentative decision to stay in Korea.

During Scott’s work experience with AEI he met and cooperated with a number of people from Austrade on complimentary projects and he had already applied for a couple of Austrade positions. He had also expressed his interest in Austrade as an organisation as it tied in with his desire to work in furthering Australia’s trading opportunities overseas while representing Australia in Korea. Therefore by the time Scott applied for this short-term position he had already put together a strong case.

Scott was successfully awarded the short-term contract and was able to significantly expand his professional network through this opportunity. 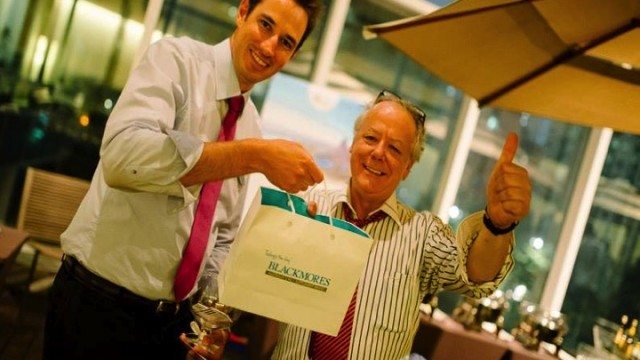 During his time at Austrade Scott met representatives from Blackmores but it was ultimately through an introduction from the Executive Director of AustCham Korea that Scott was introduced to a job opportunity with the natural health solutions company.

The Executive Director of AustCham threw a series of unexpected connections at me, then a fifteen minute coffee with a Blackmores representative quickly turned into a two hour chat… and an offer to come on as a business development manager. It seemed that it was the perfect match but both sides realised the position was still under consideration and so we agreed to keep in touch.

As Blackmores continued to record a number of impressive growth milestones in Korea, the company eventually presented Scott with a counteroffer to join the organisation as Korea Country Manager. This was the perfect opportunity for Scott.

Following a number of years regularly attending and volunteering at AustCham events, Scott was successfully appointed as the youngest ever board member. Board member applications are open to those with more than twelve months membership (not including student membership) and Scott angled his application on the back of bringing “a fresh perspective on the Australia-Korea relationship while respecting and adhering to AustCham traditions.”

Following a successful tenure at Blackmores, Scott began to focus his attention on returning back into the tourism industry. Scott already had several years of experience working with tourism providers in Melbourne and was very passionate about the importance of the industry to Australia-Korea relations.

I think the greatest way to improve relations is to get people together and tourism comes first in bringing people from both countries closer together.

Following rumours in Seoul that the Country Manager of Tourism Australia would step down after a nine-year tenure, Scott began consistently visiting the organisation’s website on a daily basis in anticipation of this opportunity.

Scott’s experience with government organisations in Korea, Korean language proficiency and the support of his referees then played a major part in securing the position.

Scott’s rise from a student living off $900 a month to Country Manager of two organisations and becoming one of the most successful young professionals in Korea demonstrates the importance of complimenting work experience with your studies and the benefits of speaking Korean and networking in Seoul.

Director at Asia Options.
Olly works in Hangzhou China and is enthusiastic about entrepreneurship, e-commerce, Asia education, data science, and foreign languages. Olly is a graduate from RMIT University and the Hopkins Nanjing Center for Chinese and American Studies. Olly speaks Mandarin and Korean.

Read this article in your language!

Asia Options is an online platform that connect future leaders with opportunities to engage with Asia. Our mission is to build a generation of Asia-literate young people, both through comprehensive coverage of the study, work and leadership opportunities available, and through our dynamic online community.